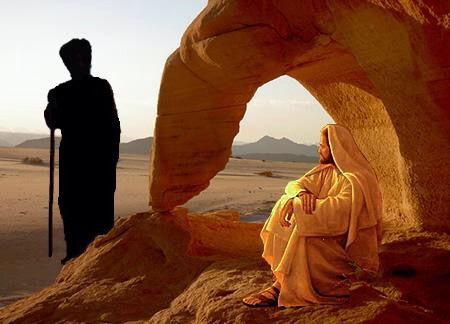 Jesus is Tempted in the Desert by the Devil.

I see the solitary land which I already saw on my left-hand side in the vision of Jesus’ baptism in the Jordan. But I must be some way inside the desert, because I neither see the beautiful, blue, slow flowing river, nor the green strips of vegetation which coast its banks, and are nourished by its waters. There is nothing here but solitude, stones and such a parched earth that it has become a yellowish dust, raised now and again by the wind in small eddies, which are so hot and dry that they seem to be the breath of a feverish mouth. And they are very troublesome because of the dust penetrating nostrils and throats. There are a very few small thorny bushes, strangely surviving in so much deslolation. They look like small forelocks of surviving hair on a bald head. Above, there is a merciless blue sky; below, arid land; around, stones and silence. That is what I see as far as nature is concerned.
Leaning against a huge piece of overhanging rock which, because of its shape, forms a kind of grotto, there is Jesus sitting on a stone that has been taken into the cave. That is how He protects Himself from the scorching sun. And my internal adviser informs me that the stone, on which He is now sitting, is also His kneeling-stool and pillow, when He takes a few hours rest, enveloped in His mantle, under a starry sky in the chill air of the night. Near Him, there is a haversack which I saw Him take before departing from Nazareth. It is all He has. And from the way it is folded, I realise it has been emptied of the little food Mary had put into it.
Jesus is very thin and pale. He is sitting with His elbows resting on HIs knees, His forearms foreward, His hands joined and His fingers interlaced. He is meditating. Now and again He looks up and around, then looks at the sun, almost perpendicular in the blue sky. Now and again, particularly after looking around and at the sun, He closes His eyes and leans on the rock sheltering Him, as if He were seized by dizziness.

I see Satan’s ugly face appear. He does not show himself in the features we imagine him: horns, tail, etc. He looks like a bedouin enveloped in his robe and in a large mantle that resembles a domino. He is wearing a turban on his head and its white flaps fall along his cheeks, down to his shoulders protecting them. Thus only a very small dark triangle of his face can be seen, with thin, sinuous lips, very black hollow eyes, full of magnetic flashes. Two eyes that penetrate and read into the bottom of your heart, but in which you can read nothing, or one word only: mystery. The very opposite of Jesus’ eyes, also so magnetic and fascinating, which read in your heart, but in which you can also read that in His Heart there is love and bounty for you. Jesus’ eyes caress your soul. Satan’s are like a double dagger that stabs and burns you.

Jesus is tired, and sits down, leaning back with His head resting on the stone. He looks exhausted. He is perspiring. But angels come to blow gently with their wings in the closeness of the cave, thus purifying and refreshing the air. Jesus opens His eyes, and smiles. I do not see Him eat. I would say that He is nourished by the aroma of Paradise, and is reinvigorated by it.
The sun has set in the west. He takes His empty haversack and in the company of the angels who, flying above His head, emit a mild light while it is getting dark very rapidly. He starts walking eastwards, or rather north-eastwards. He has resumed His usual expression, His step is steady. The only remaining sign of His long fast is a more ascetic look on His pale, thin face and in His eyes, enraptured with a joy which does not belong to this world.
~~~~~~~~~~~~~~~~~~~~~~~~~~~~~
Jesus says: (to Maria Valtorta)
“Yesterday you had no strength, which is My will, and you were, therefor, half-alive. I let your body rest and I made you fast the only way which is burdensome for you: depriving you of My word. Poor Mary! You kept Ash Wednesday. You tasted an ashen flavor in everything because you were without your Master. I did not let you perceive Me, but I was there.
This morning, as our anxiety is reciprocal, when you were half asleep, I whispered to you: ‘Agnus Dei qui tollis peccata mundi, dona nobis pacem’ and I made you repeat it many times and I repeated it to you many times. You thought that I was going to speak about that. No. First there is the subject which I showed you and upon which I will comment for you. Then this evening I will illustrate this other one.
As you have seen, kindness is always Satan’s disguise when he presents himself. He looks like an ordinary person. If souls are careful, and above all, if they are in spiritual contact with God, they percieve the warning that makes them cautious and prepares them to fight the devil’s snares. But if souls are distracted, separated from God by an overwhelming sensuality, and are not assisted by prayer, which joins them to God and pours strength into hearts of men, then they seldom perceive the snares hidden under the innocent appearance and athey fall into the trap. It is then very difficult for them to free themselves.
The two most common means adopted by Satan to conquer souls are sensuality and gluttony. He always starts from material things. Once he heas dismantled and subdued the material side, he attacks the spiritual part.
First the morals: thoughts with their pride and greed; then the spirit, obliterating not only its love–which no longer exists when man replaces divine love with other human loves–but also the fear of God. Then man surrenders his body and soul to Satan, only for the sake of enjoying what he wants, and enjoying it more and more.
You saw how I behaved. Silence and prayer. Silence. Because if Satan performs his work of seducer and comes round us, we must put up with the situation without any foolish impatience or cowardly fears. We must react with resolution to his presence, and with prayer to his allurements.
It is useless to debate with Satan. He would win, because he is strong in his dialectics. Only God can beat him. And so you must have recourse to God, that He may speak for you, through you. You must show Satan that Name and that Sign, not so much written on paper or engraved on wood, but written and engraved in your hearts. My Name, My sign. You should answer back to Satan, using the Word of God, only when he insinuates that he is like God. He cannot bear that.
Then after the struggle, there comes victory and the angels serve and defend the winner from Satan’s hatred. They restore him with celestial dews, with the Grace that they pour with full hands intothe heart of the faithful son, with a blessing that caresses his soul.
One must be determined to defeat Satan, and have faith in God and in His help. Faith in the power of prayer, and in the Lord’s bounty. Then Satan can do no harm.

Go in peace. This evening I will gladden you with the remainder.
(Maria Valtorta, “Poem of the Man God”)

This blog is a just drop in the ocean of information available on the web, but it has high ambitions: Defending the Catholic Faith, leveraging the wealth of educational material available in Italian, and making it available in English. View all posts by gaudio2015